Reprinted from Conduit for Action; By: David Ferguson 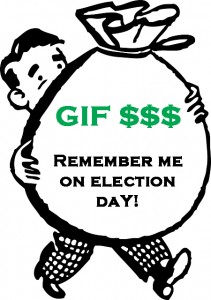 The members of Arkansas General Assembly are given discretion over millions of dollars in General Improvement Funds (GIF). For the 2015-2016 fiscal year $20 million has been set aside for the whims of legislators.  Each legislator determines how “their share” is spent. Some designate their share to go to a college others have the funds sent to the Department of Finance and Administration to then be sent to one of the eight planning and development districts and then awarded as grants.

The public is not privy to exactly how the money is divided among legislators, but if the House and Senate each received $10 million, and then with each Senator getting an equal share and each Representative getting an equal share, then each Senator would have discretion over $285,714.28 and each Representative would have discretion over $100,000.

Why are state funds distributed upon the discretion of an individual legislator instead of through a formula or perhaps retained for other needs? $20 million helps incumbent legislators gain favor in their districts.

Republican Doug Driesel, who ran against incumbent Democrat Representative Scott Baltz in District 61, stopped by a rural fire department to campaign.  According to Driesel, several firefighters told him they liked what he stood for, but that they couldn’t vote for him because Baltz had gotten General Improvement Funds for their fire department.

Blaine Davis ran as the Republican candidate in the adjoining District 60, against incumbent Representative James Ratliff. Recently, I asked Davis if he had a similar experience with fire fighters in his race. Davis responded:

“Absolutely.  Several that I’d known for literally forever told me they would have to support him or just groaned when I told them who I was running against.  He’s given thousands to every one of them [fire departments].  Heck, at the Strawberry Fire Department fundraiser all he [Ratliff] did was stand up and talk about how much he gave them.”

A GIF grant is not likely to be forgotten by the members of an organization receiving the grant. In addition, local governments and volunteer organizations are also likely to be a good source of campaign workers because these are people who are already active in their community.

Could GIF make the difference in a legislative race?  You bet! Consider how close Blaine Davis’ came to winning.  Davis only lost to the incumbent by 50 votes. There are a lot of fire firefighters in House District 60. If just 26 firefighters voted for the incumbent because of GIF funds, then GIF funds made the difference in the outcome in that race.

Legislators doling out GIF grants is a big deal in many areas of the state. Local newspapers, especially in rural areas, love to report that their Representative or Senator got GIF for local communities and organizations.  Legislators are quick to get in the photograph when as poster size check is handed out.  Click on name for an examples of the publicity legislators get from “their GIF:

Some legislators send all or a portion of “their” GIF to colleges. It is good publicity too.  For example, the University of Arkansas made sure its supporters and alumni knew that thirteen legislators deserve recognition for sending GIF to the university for three projects in the combined amount of $3 million. See article: University receives increase in state funding monies from General Improvement Fund

Many people see these articles and think “Our legislator is working hard and knows how to bring home the bacon.”  No effort was actually needed. Legislative GIF is just a slush fund created to give every legislator a share, whether the legislator uses it for a good purpose or not.

If the local newspaper fails to report the story or an organization’s newsletter fails to publicize it, what does a legislator do?  The answer is easy – toot your own horn on social media.  That is what Rep. Ratliff did when he did not get the publicity he hoped for.  Here are a couple of examples from James Ratliff’s Facebook account:

June 4, 2014: “Had a busy day. Started by going to the women’s battered shelter in Highland this morning awarding them a grant of $1000 for fixing their plumbing.”

April 12, 2015: “The fire chief Stan Mayland thanked myself (Rep James Ratliff) for the grants that bought all new turnouts and equipment for all the firemen in Strawberry.”

It seem a bit odd for a Representative to need to put his own name in parentheses on his own Facebook account.

1. Legislative discretion over the money is needed in order to get money for projects in rural areas. Wrong. Sorry but if getting funds to rural areas is the goal there would be a lot easier and cheaper ways of doing it. First, it is not just rural legislators who have say over GIF funds. Second, no legislator is required to use the funds for a rural project or even within his or her own district.

2. Legislative discretion is needed because a legislator knows better than anyone which local project should get a GIF. Wrong again. Legislators sometime do not know the greatest needs in their district and even if they do they have no obligation to use GIF for the most needed projects. In exercising discretion over the money, the legislator’s goals sometimes conflict with the priorities and needs of municipal and county officials.In 2013, Senator Jeremy Hutchinson directed GIF money to a firework show.  I happen to like firework shows, but local governments didn’t fund the firework show because of a lack of funds for more important projects.“Saline County Judge Lanny Fite said he has a list of projects that need funding like repaving parking lots or buying new lighting. ” “I did not like the way it was being used, plain and simple,” Fite said. “Money is very tight; we don’t have a sales tax. This money is always good to help us do projects that the county cannot afford.” [i]Also in 2013, then Representative Andy Mayberry and some legislative friends sent $120,000 in GIF to fund a playground that is fully accessible to disabled children.  That is certainly a worthy cause! But it also seems to be an instance in which a state Representative single handily pushed a project onto the county despite the quorum court not having money to maintain a park or replace equipment in the future.  It was noted by a quorum court member that the county didn’t even have a parks department. Julie Mayberry, Rep. Andy Mayberry’s wife and now a state Representative, responded to criticism by the quorum court in 2013 by suggesting that the quorum court create a parks department.[ii]Could we handle needs without giving legislators an expensive reelection tool?

On the other hand, maybe we would miss those newspaper photos of legislators handing out poster sized checks and their Facebook self promotions. The state also has turn back formulas for sending state support to municipalities and counties.

Consider that a significant portion of legislative GIF goes to colleges. We already have a funding formula for the colleges. The Department of Higher Education should have a good understanding of needs of Arkansas colleges.  And, under the current system there is no guarantee that the most important need will be addressed because a legislator with a college in his or her district could choose to spend his or her share on other types of projects.

Do we really have to give a legislator a “please-reelect me fund” in order to fund worthy projects.

Why Are So Many Employers Unable to Fill Jobs?

Why Are So Many Employers Unable to Fill Jobs?